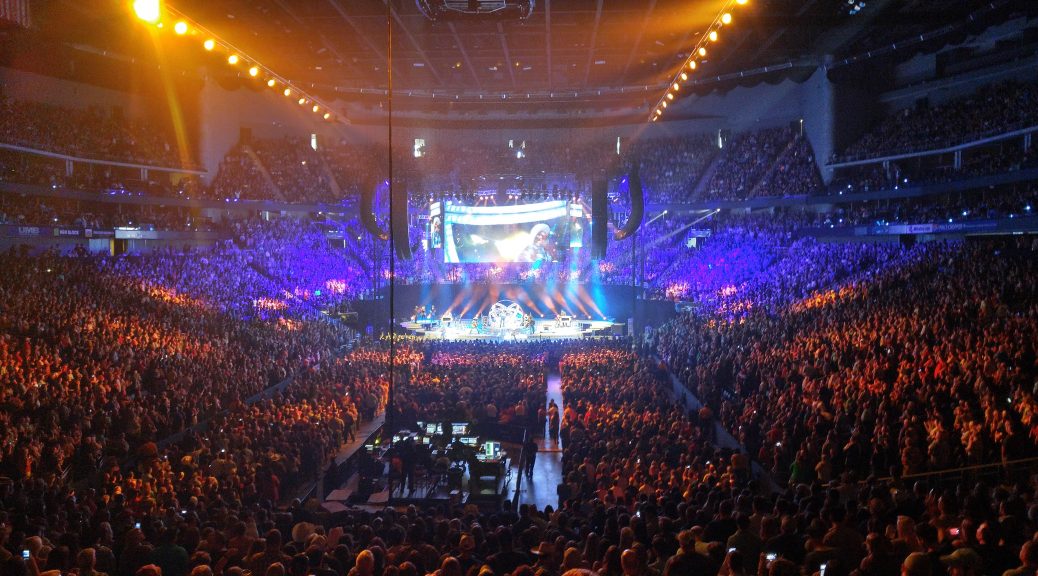 I have been a fan of Garth since his first album.  Does it mean I am a big country music guy, pfft, far from that I usually really dislike country music but Garth has the talent, passion, and uniqueness for me that makes him stand far above the country music landscape.

His stage setup was a oval stage at the end of Sprint center with huge screens on each side (nice touch), here is a setup shot: 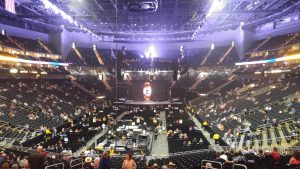 I found it interesting that Amazon was a clear sponsor being printed on his bags and several videos on a rotation before the show on the (I am going to guess) Amazon paid for screens: 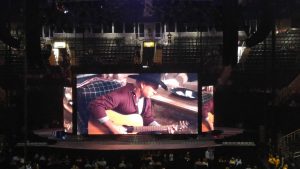 The interesting part of his stage setup is his light bars that come out into the crowd. They turned off the house lights and these lightbars were used to light up the center – I suppose allowing the stage crew the ability to control the house lighting. During “The Thunder Rolls” these light bars had (what acted like) dozens of strobe effects that made Sprint center look like a super lightening storm – it was pretty epic.

This was the only concert at Sprint center I have seen that utilizes the lighting around the center, meaning the lighting was synchronized with the show – it was unique and added a neat subversive effect: 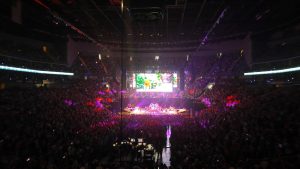 This tour was labeled “The Garth Brooks World Tour with Trisha Yearwood“. Sure Trisha came out sang a song with Garth then sang 4 others and back to Garth. Kinda a special guest contribution I thought, but then again she is married to the guy.  Shot of Tricia on stage: 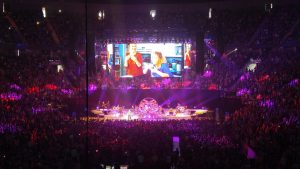 Here is a shot with the drum set cage in the middle lite up, it also rotated and was built with the idea that Garth would climb all over it (as he did several times): 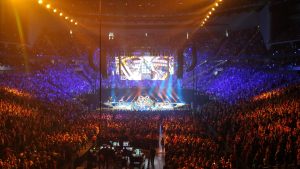 Garth is no doubt a showman. Couple his energy, passion for what he is doing and him genuinely having a good time you just cant help admire the guy and his ability to get 20k people singing 20 year old songs.

We had tickets in section 122, all seats were same price $65 and everyone was limited to 8. This I think is one of the reasons the man sold out 7 shows in a row this time around (13 when Sprint center opened!) This was a Saturday afternoon (15:00) concert, Angie and I think this is a first for us most of our concert outings are nighttime and we get home past midnight.

Really one of the best concerts for energy and passion I have seen in a long time, even if you’re not a fan of the country music scene if you like to see people doing their thing, and sharing it with you, Garth is one to catch.

UPDATE: We returned to Sprint center at a later date and saw this banner which we though was neat because we saw one of the shows (left side banner): 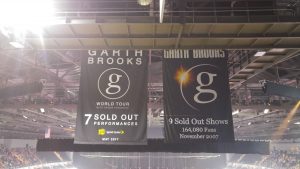 Me and my Angie: 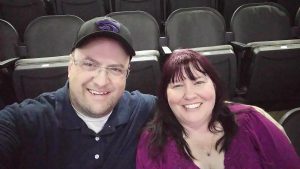