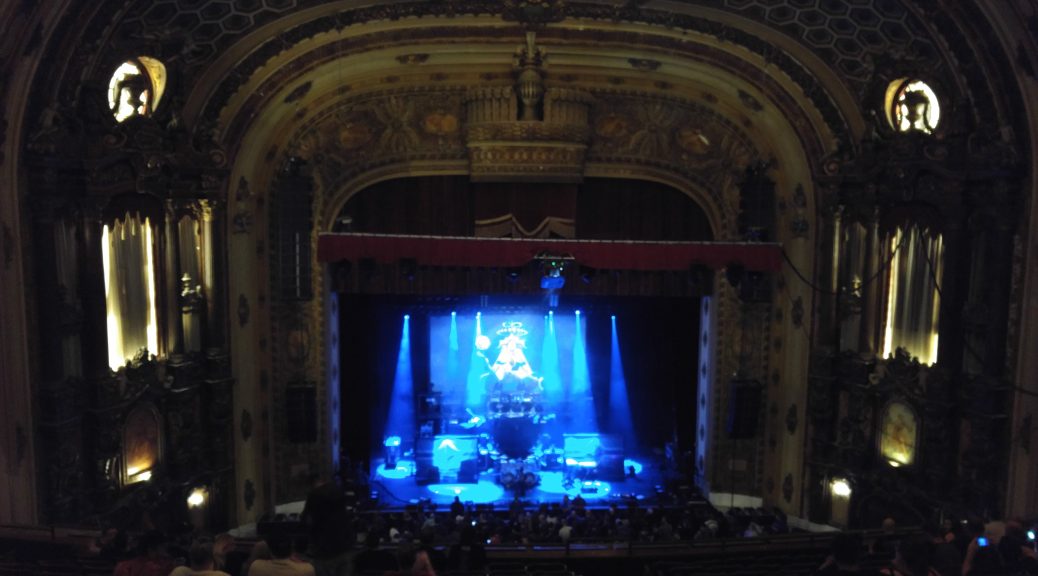 I have a couple of Devin Townsend’s albums and saw he was opening for some band and Opeth (who I also have several albums of) at The Midland, so Angie and I picked up tickets.

The initial set was crowded, they had all three bands set on the stage each in front of the other. From what I could tell from my four-hundreds cheap seats it looked like the opening act (The Devin Townsend Project) only had about six feet of stage: 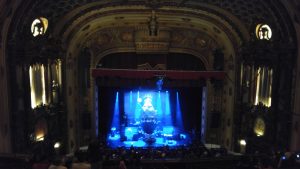 Here is a shot of Devin doing there thing with their cool backdrop: 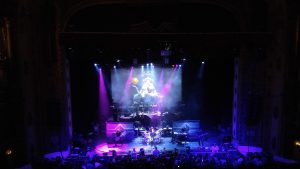 After a couple of songs you were reminded that Devin Townsend is a strange fellow making some really odd comments. I think he was trying to be funny but most of it sounded like random thoughts strung together to fill awkward silence. At one point something was wrong with the gear and he literally rambled on saying “and we keep the audience busy to not see the technical problems” (paraphrasing) while crew members scampered about fixing this and that.

Then a set change for Gojira: 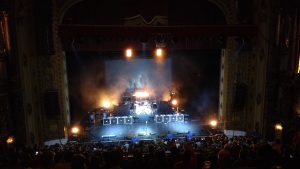 I do have “Magma” from these guys but I guess I didn’t remember this was going to be pretty hard set. Pretty simple stage setup but damn their lights where very VERY intense. Several points you just had to close your eyes to prevent some sort of seizure reaction. 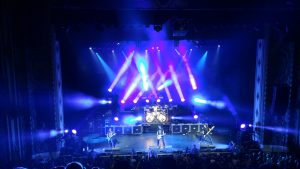 At any rate their music was hard, intense and frankly hard to follow with the volume being so loud it was just mottled loudness. Angie and I always wear earplugs but usually we can make out the music fine, here the double bass and the guitar, well, noise was so dominate all you really heard was a mix of aggression and screaming. Not that it was horrible we were just mostly confused to what was really going on.

That said the Gojira drummer was something to see: 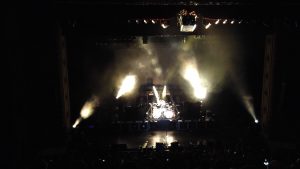 The band clearly recognizes that this guy has some serious drum skills, he had several solos and at multiple points I think I caught myself saying “Damn!” out loud. Yeah, really impressive stuff.

Then the set change for Opeth (note the covered up Gojira stuff in the middle, they didn’t really clear the set just covered up the others, shared the majority of the light bars): 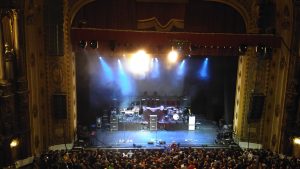 Their backdrop was their signature logo: 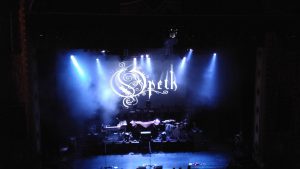 Angie and I were hoping Opeth would take a bit of a softer approach as we were kinda still recovering from the onslaught that was Gojira. Opeth didn’t disappoit as several of their songs had more melodic structure and showed off their technical chops.

Opeth took the stage and Mikael Åkerfeldt quickly established he is the man with his stage presence and his ability to both sing and growl: 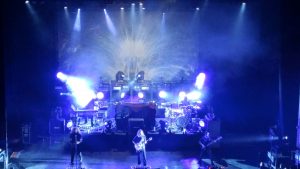 Opeth played several songs from their “Sorceress” album, which has both beautiful and disgusting imagery on the cover: 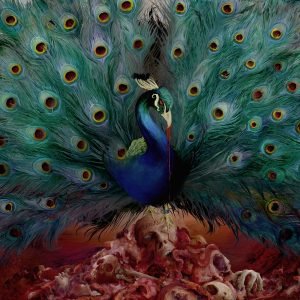 For some reasons the tour managers for these groups must think their audience are wee folks, no tour shirts on any of the groups larger than a 1x – I mean seriously. If you guys make most of your tour receipts off of merchandising then bring shirts that fit real people. All together now a collective “GRRRR!”.

Anyhow overall it was an interesting event, I am not sure how I am going to convince Angie to go to the next new to her band that I sell with “oh, ah, they sound like Dream Theater, yeah just like that”.

Me and my Angie (I am wearing my Iron Maiden trooper shirt which to my surprise there were about 5 other Iron Maiden shirts seen at this event): 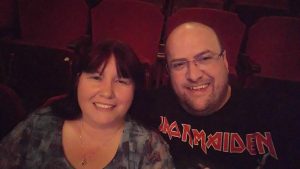