Wife and I went and saw a (what I thought anyway) was a strange pairing: Tesla, Reo Speedwagon and Def Leppard. 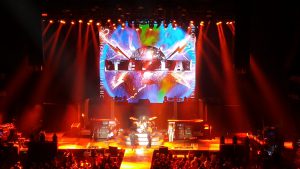 Was hoping these guys would bring it and show the other two how to do it. Ah, well, Jeff Keith seems like a serious goofy guy and the band well they did play their music – I would not say they brought their A game. A disappointing set of about 40 minutes. 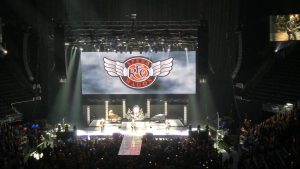 Ok, I admit it. I was expecting these guys to be like the Yes experience (old men shuffling around) – color me surprised. These guys were awesome, showed those Tesla whipper snappers how to bring your A game. Well done gentlemen, well done. Their set was just about an hour. 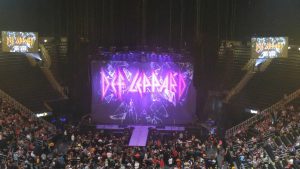 I will be the first to admit I am not the biggest Def Leppard fan. I wasn’t expecting much – I was sorely wrong. These guys had great production quality, graphics were excellent, sound was a bit overdriven I thought. Still they did about 80 minutes with a 2 song oncore. Oh and watching the marvel that is Rick Allen is something.

Me and the misses (yes I am wearing my coveted Dream Theater 2012 tour shirt): 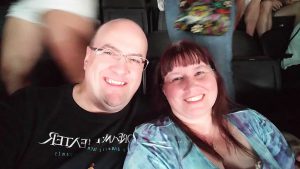 Molly and I went to go see “Future Now Tour” last night at Sprint Center which had Mike Posner opening and (I guess?) Demi Lovato and Nick Jonas headlining.

As far as performances Mike Posner should be headlining soon, clear talent passion and stage presence. No doubt Demi can sing but she tends to Christina it up a bit. Nick well I guess he is pretty, the ladies seem to like him.

This concert had several firsts concert wise for me (and I have seen dozens of concerts).