I wanted something a bit more custom looking than the stock WordPress Icon so I decided to take my avatar and make a favIcon from that.

I went to Favicon-Generator it does a nice job of resizing and making the “ico” file, which is pain to create, and gives you several varying sizes of your uploaded image:

It also does a nice job of creating the html to include in your header. I only used a subset from the generated html:

I created a child theme in Word Press then edited the header to include the above in the <head> block.

Managed to get ASP.NET 5 preview up and working via Visual Studio 2015 RC in a Docker container hosted on my local Ubuntu server (read; not an Azure hosted server). All in Oracle VirtualBox Virtual Machines.

My VirtualBox host is a Windows 8.1 box and I used two VMs: a Windows 7 Development Box (I tried Windows 8.1 in a VM and the performance was terrible) and a Ubuntu Server 14.04.2.

For the most part it was pretty much documented here. My only hiccup was that I had to do a “Restore Packages” to get Grunt to install its packages, this didn’t happen with a “Rebuild” as I would expect. I set my “Custom Docker Host” settings like this:

After publishing from Visual Studio I was able to get a list of the images on the Docker server and it now included the new published app:

So the next challange is to get MongoDB setup running in a Dockerized instance on my Ubuntu server then create a ASP.NET MVC application consuming that server and publish that via Docker and see how performance and maintenance plays out.

I figured out the magic sauce for getting ASP.NET 5 running on Ubuntu 14.04 in a VirtualBox VM. 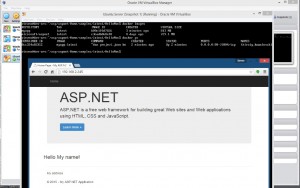 I followed this mostly for the setup but your Dockerfile should look like this:

Be sure and set your VirtualBox setting to “Bridged” so you can hit the IP from your workstation.

Hopefully this will be a start of something new and exciting – or another thing for me to procrastinate about. I have tried several times before to blog consistently I just get, well, sidetracked.

My intention is to blog stuff that I don’t want to forget or stuff that I want to share. Most things I would expect to be of a technical nature but I suspect that sometimes I will want to post something for the ages to remember my wit and wisdom (read; me ranting about something inconsequential).